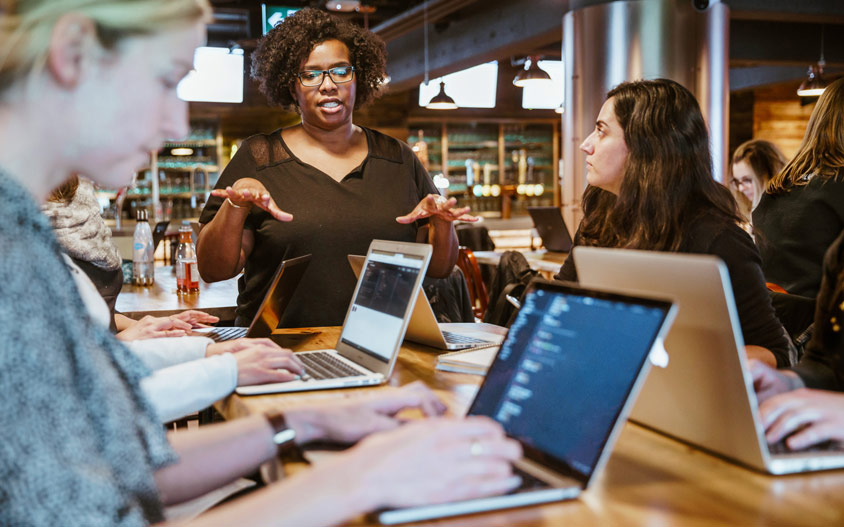 Most leaders at institutions of higher education profess a strong desire and intent to diversify their faculties and to ensure an inclusive and fair work environment.  Administrators believe that equity is an important goal for any college or university, but a diverse faculty also encourages higher numbers of student applicants—including more women and students of color—better retention rates of both students and faculty members, and a greater variety of perspectives being presented to students in the classroom. Moreover, as stated in a recent report released by Columbia University, “There is now abundant data that diversity is essential to scientific excellence, with experiments showing that diverse teams have cognitive diversity that allows them to outperform homogeneous teams. Diversity in all its forms including gender, race, ethnicity, sexual orientation, physical ability, religion, and age, all contribute to a richer and deeper experience for students and to group dynamics that are better at creatively solving problems, scientific or otherwise.” So, why are colleges still struggling to meet their diversity goals and why is it more difficult for female and minority faculty members, once hired, to climb the ladder of academic success?

As reported in The Chronicle of Higher Education, the equity study by Columbia sheds light on the factors that contribute to the lackluster progress made in recruiting, hiring, retaining and promoting minority and female faculty members at that institution and the inequities in the work environment that make achieving professional success at the highest levels of academia more challenging for these faculty members. While this report limits its findings to Columbia, it is sure to resonate with the experience of faculty members at many, or most, colleges and universities, where similar challenges have been reported.

Inspired by the Massachusetts Institute of Technology’s landmark 1999 study of gender inequity at their institution, the Columbia University study looked at how their tenure-line faculty members in the arts and sciences feel about central parts of academic life, “such as salary, workload, work-life balance, and the climate in their departments.” The report found that women and minority faculty members experience more discrimination and unequal treatment compared with their white male colleagues in all parts of academic life, including receiving tenure and opportunities to conduct research. The Columbia professor Maria Tolstoy, who chaired the committee that spearheaded this study, was “struck by how much ‘the smaller things’ contribute to faculty feeling disenfranchised from their departments.” In a recent article in The Chronicle of Higher Education, she said, “The added burden of committee service, the invisible labor, the belief that people don’t value their work—those kinds of things add up.” Women and underrepresented minorities reported what the study calls “concerning disparities” in opportunities and work environment. For example, both groups say they are required to do more administrative work, serve on more committees, and spend more time mentoring students than their white male colleagues, invisible labor that is not rewarded in the tenure and promotion process. Childcare challenges and expenses, being excluded from informal departmental networks, and having to work harder to be taken seriously also contribute to the considerable obstacles that female and minority faculty members face when trying to conduct research and advance their careers.

In addition to being disenfranchised by disparities in hiring, responsibilities, workload, and exclusion from insider networks, white and minority female professors at Columbia report being victims of sexual harassment and discrimination by their colleagues in far greater numbers than their male counterparts. In this report, 55 percent of women said they have experienced harassment compared with 18 percent of men, and 65 percent of women compared with 10 percent of men experienced discrimination. In a recent article in Scientific American, the authors assert, “The ‘meritocracy’ of academia fails women repeatedly; it fails to account for the many negative career impacts of harassment, including mental and physical health impacts, decrease in scientific output, career sacrifices and potential retaliation from harassers and others in power.”

In a strikingly similar report from 2016, a Yale University committee looked at more than four decades of diversity initiatives that have failed to live up to their stated goals. According to The Chronicle of Higher Education, the study found that Yale has “enabled a climate hostile to many female and minority professors and graduate students . . .  and has repeatedly failed to execute ambitious plans to diversify its faculty.” While the committee stated its belief that these failed policies and plans are not the result of ill will, it found “an accumulated pattern of thousands of small decisions at all levels—decisions that persistently, if largely unconsciously, have cast the diversity of the faculty as a lower priority.”

In a recently published book, An Inclusive Academy: Achieving Diversity and Excellence, the authors Abigail J. Stewart and Virginia Valian emphasize the role that unconscious stereotypes and biases have on the hiring process and on attitudes and judgments in the academy. They believe most colleges are sincere in their stated commitment to diversifying faculty and ensuring equity. In an interview with MIT Press they argue, “People don’t want to think that they are biased, perhaps especially in academia. But the data suggest that we are influenced in our evaluations of others by our reactions to their personal histories, their similarity to us, and our schemas. It’s partly our belief in our own good nature, and our reluctance to see that our good will is not enough, that perpetuates the status quo.” Stewart and Valian suggest that colleges need to be doing much more than they are doing now to succeed at creating and maintaining faculty diversity. “It takes a continual effort on multiple fronts to change institutions,” they assert. As evidenced in the Columbia and Yale reports, good intentions and lip service are not enough; structures and systems have to be put in place and consistently enforced for change to happen. Among many examples of how some schools are successfully increasing diversity, Stewart and Valian point to one practice in which “deans at some institutions have turned down requests to interview candidates when departments have not shown a wide range of potential candidates. Deans have also offered extra funds to departments to bring in more candidates so that the short list will be more diverse.” The book also describes best practices for searching and hiring as well as how to promote respect and camaraderie among faculty members. The stakes are made clear in a National Center for Education Statistics report that shows that in 2016, of all full-time faculty in degree-granting postsecondary institutions, 41 percent were white males; 35 percent were white females; 6 percent were Asian or Pacific Islander males; 4 percent were Asian or Pacific Islander females; 3 percent each were black males, black females, and Hispanic males; and 2 percent were Hispanic females.

Research suggests that faculty diversity benefits everyone, most importantly the students for whom the university is charged with providing the best education they can. Cultural diversity means diversity of thought and experience, a boon to any intellectual enterprise. Students of color and white students, male students and female students, all benefit from learning from professors who look like them and professors who don’t. Columbia and Yale universities, among others, have pledged to become leaders in efforts to diversify and ensure equitable and safe working environments. Other schools would do well to follow suit, both because it’s the right thing to do and because the research is clear: diversity promotes innovation, which advantages colleges and prepares their students for leadership, citizenship, and professional competitiveness in multicultural America and the global community.